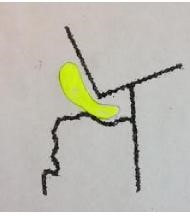 The yellow-colored section in the image at left depicts the watershed of Shaddocks Creek in the southeastern corner of Chatham County, North Carolina.  Here John Upchurch III and his family flourished in the 1780-1820 era.  This watershed is nestled between Wake County to the north and Harnett County to the east.  The creek flows into Cape Fear River, represented by the wavy line, which today forms the boundary of Lee County.  This iconic image recalls for thousands of descendants of the John Upchurch III family their North Carolina heritage.

An Overview of John Upchurch III and his Family

A.  A Brief Review of the Life of John Upchurch III

John Upchurch III joined the Virginia Militia and fought in the French and Indian War.  He would have been about age 35 at the time of the Revolutionary War and his service, if any, is unclear.  We know that John inherited land from his father, James, in 1784.  He sold at least some of this land in 1786 and moved to Chatham Co., NC, where he acquired 300 acres that same year.  John acquired an additional 100 acres through a 1794 land grant.  Eventually, both of his brothers moved to other counties in North Carolina.

In 1795, John died intestate in Chatham Co. and there was an estate sale within the year.  Records show that his son Samuel sold his land to his brother John and moved to Tennessee and later to southern Illinois. A third son, Stephen, also owned land nearby in Chatham Co., and he eventually migrated to Tennessee as well.  By 1820, all of the sons of John Upchurch III had moved from the area.  As regards the daughters of John Upchurch III, the story is somewhat unclear and will be revisited elsewhere.

Further information on John Upchurch III and his relationship to the extended Upchurch family can be found in Video #15 at www.upchurchstory.com and through the searchable Upchurch Bulletin on that website.    See Appendix 2.

B.  The Story of How the History of the John Upchurch III Family Came to be Known
In the 1950s, several individuals were independently researching their Upchurch heritage.  They somehow found each other and formed a sort of cabal to pool their efforts.  They were Martha Lucy (Upchurch) Tidd, Etta Belle (Lewter) West, the brothers Oliver and Donah Upchurch, Dr. Coy Upchurch and William Kendrick Upchurch II.  The leader of the pack was Martha and it was she who pioneered the uncovering of the letters that Michael Upchurch I sent back to England in the 1650’s.  Michael was the great-great-grandfather of John Upchurch III.  All members of the Upchurch family are deeply indebted to the Martha Lucy cabal for giving the initial shape and form for the first five generations of the Upchurch Family in America.  A special lasting product of the cabal is the book, Upchurch Family, by Belle West.  There we find brief but important references to John Upchurch III, as follows:
​
p. 23      John Upchurch III is documented in the will of his father James Upchurch III, written on June 24, 1704, in Brunswick Co., VA and proven on July 26, 1705.  John Upchurch III and his brothers Harmon Upchurch and James Upchurch IV were executors of the will.  It makes a bequest to John Upchurch III –To son, John [III]:  “all lands below westward road on N side Whiteoak, beginning at Zachariah Sim’s line to Stephen Smith’s line.”

These brief citations provided the bedrock of information that fixed the heritage of John Upchurch III and his position as a member of the fifth generation of the Upchurch family in America.  West left it to later researchers to document that John Upchurch III died in 1795 in Chatham Co., NC and to discover and publish details on his descendants.

Olive Morgan’s book, The Upchurch Story, appeared in 1976 shortly after the West book.  Morgan relied heavily on private correspondence with West to describe the first five generations of the Upchurch family in America.  Morgan’s main interest was in the family of her ancestor George Upchurch, a fifth generation member and a second cousin of John Upchurch III.  Even so, she included large blocks of information on other parts of the Upchurch family that just happened to be available, which included some on the John Upchurch III family.

On page 31 of her book, Morgan provides valuable new information on John Upchurch III (referred to as “John 2”) and his family as follows:
“The will of Joseph Hamilton (Hambleton) was written in 1780, recorded Nov. 1784.  His heirs:  Wife Ann, dau Ann Upchurch, daus Elizabeth Ezell, Sarah Sandros,; sons Walter, William, John, and Samuel Hamilton.  Test:  Benjamin Harrison, Patty Harrison.  (Will at Virginia State Archives).   Nancy, Nanny and Nan are diminutives of Ann, therefore, it seems that John 2 son of James (3) married Ann Hamilton, her brother was Samuel Hamilton, they were children of Jos and Ann Hamilton.  John 2 died intestate in Chatham County North Carolina in 1795.  Buyers at the sale held in 1798 included Ann Upchurch and Samuel Upchurch.”

Morgan in The Upchurch Story, provides a large block of information (pps 159-244) on Samuel Upchurch, a son of John Upchurch III.  We need not recap the details here, as all of it has been reproduced in one form or another in issues of the Upchurch Bulletin by permission of Morgan.  Morgan did a good service in publishing the compendium on Samuel Upchurch representing the work of others to whom she gives credit on p. 159 as follows:
“The family record was provided by Etta Upchurch (Mrs. John C.) of Cape Girardeau, MO who obtained it from Martha Murray, oldest grandchild of Thomas L. Upchurch.  Place of birth of Samuel and Mary Upchurch is from their son, William, who stated his parents were born in Virginia.  Compilation is by Mary Afton Anderson (Mrs. H.O.) with the help of others in the family.  Sincere appreciation for their help.”

Clearly the descendants of John Upchurch III are indebted to Etta, Martha, and Mary and associates who clearly must have been accumulating Upchurch family information well before 1970.  This set of collaborators rivaled the set headed by Martha Lucy (Upchurch) Tidd, West, et al.  Members of this team continued their work into the 1980’s as they morphed into collaborators of Phil Upchurch, editor of the Upchurch Bulletin.

While Morgan was a diligent researcher, her book was greatly enhanced by the work of earlier generations.  A good example would be that she captured the work of Meeks Bramlett (1864-1929).  The significant connection is that two daughters of Samuel Upchurch married Bramlett men.  Later the Upchurch Bulletin was enhanced when cooperator Deborah G. (Ferguson) Dennis and collaborators produced a 1999 update of the work of Meeks.  Those who purport to write the history of the John Upchurch III family stand on the shoulders of earlier researchers.  It seems unlikely we shall ever give enough credit to those who preceded us in family history searches.

At the time the Upchurch Bulletin took on the task of rounding out the entire American Upchurch family and their English heritage in 1980, much remained to be uncovered about the family of John Upchurch III.  In follow up, the fit of John Upchurch III into the family has been validated and amplified.  While much was known about son Samuel Upchurch as of 1980, Phil and his collaborators were able to shed light on the situation with the other two sons, Stephen Upchurch and John Upchurch VII.  Details will be found in the Upchurch Bulletin issues and in this Allied Families project to “enroll” the John Upchurch III family.  The stories of how details on these two brothers unfolded will be told elsewhere and will reveal input from unique collaborators who have since departed.

Daughters of Upchurch men of the first five generations of the Upchurch family in America appear lightly on the records, if at all.  For John Upchurch III, we posit five daughters, some better known than others.  Your editor, Phil Upchurch, has more than a passing interest in one of the five, Elizabeth.  She must have been the Elizabeth Upchurch who, in 1818 in Chatham Co., NC, became the first wife of my great-grandfather Gilbert Upchurch (they would have been 3rd cousins).  It appears that Elizabeth died after bearing their only child Mariah Elizabeth Upchurch.  Mariah was blind from birth, never married and lived with her brother Bartley Jefferson Upchurch (my grandfather) all her life.  Such are the twists and turns of family history.  Under the banner of Allied Families, one hopes we can build an interest group dedicated to uncovering, sharing, and preserving more about the five daughters of John Upchurch III.

This brief recap of how the story of the John Upchurch III family unfolded reveals the dedication and sharing nature of numerous participants.  Their passionate engagement gave them much joy and the results of their labor of love are ours to savor if we will just preserve it.  Such is the mission of Allied Families.

​
C. A Presentation of John Upchurch III, his Children, and Grandchildren